HOW WILL EXCHANGE RATE AFFECT YOUR MALLORCA PROPERTY PURCHASE ?

Do you intend to buy a Mallorca property in 2016? If so, you’ll know that one of the things that most affects how much you pay for your Mallorca home is the exchange rate. After all, just a small shift in the pound to euro exchange rate can add or cut thousands from the purchase price. With this in mind, what’s in store for the exchange rate this year? Well, here are some of the possibilities.

The first possibility is that the pound to euro exchange rate will strengthen sharply, if the UK rejects Brexit, and votes in favour of staying in the European Union, in the referendum due on June 23rd. Were the UK to stay in the EU, we’d expect sterling to climb, because this would remove a huge political and economic risk from the UK. And in turn, it would cut the cost of buying a Mallorca property!

The second possibility is that the pound to euro exchange rate climbs, not because of UK strength, but rather Eurozone weakness. For instance, just recently the European Central Bank announced that it would extend its massive monetary stimulus to €80bn a month. This is intended to stimulate the Eurozone’s economy and lift the bloc out of deflation, but could also heavily devalue the euro!

Were the ECB’s efforts to devalue the euro, it would also cut the cost of buying a Mallorca property, by making sterling stronger in relation to the common currency. So it’s something to look out for!

The last possibility for the exchange rate is that sterling drops versus the euro, should the UK favour Brexit in the referendum. To protect against this, and ensure you pay the lowest price when you buy your Mallorca property, you may consider setting up a forward contract. This allows you to lock in the exchange rate where it currently stands, and means you won’t lose out in case of Brexit!

With all this in mind then, you’re in a good position to make the most of the exchange rate when you buy your Mallorca property. 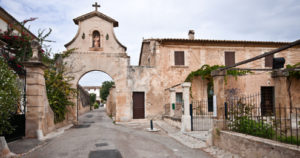 In recent years, environmental awareness has increased in almost all levels of the population. Issues such as climate change and the waste of water are already installed in people’s everyday lives. The new ecological awareness also extends to food. Ecological or biological food is the one that is good for our health and is obtained without the use of fertilizers, pesticides or growth hormones. The Biogranja La Real has designed a perfect solution: the service to hire organic mini orchards.

The crisis “hit very hard” and affected the field of architecture, in which Manino worked and which in conjunction to his experience in trying to export olive oil to the Persian Gulf encouraged him to develop a pioneering project on the islands. A farm of over 3,000 square meters in La Real where organic mini orchards can be hired.

The employer takes the managing director of NEW HOME MALLORCA, Carsten Scharmann, real estate expert in Mallorca, to a very entertaining tour of the Biogranja. “The idea is to reconnect people from the city to the countryside. And go back one hundred years but making use of the knowledge and the technology of today”, said Manino. In times of the crisis, the idea seems to be to recover the “do it yourself” concept even regarding vegetables. You hire the orchard and what is produced on it will be introduced directly to your pantry.

Forty-four mini pitches are the key to the Biogranja la real. Two strips of land divided into four squares which recover the art of the “parades in Crestall”. A system which retrieves twice the performance than the conventional farming, changing the extension of the field by almost one meter of depth”, says Manino. The soil being used disposes of an organic quality label and only organic seeds and fertilizers are used. 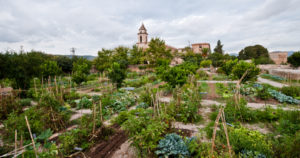 “In this project the ground rules. Humans are used to impose but here it is the ground which sets the right time” says the entrepreneur. No more tasteless tomatoes in December. Organic farming respects the time of each vegetable and establishes a crop rotation system to ensure the productivity of the land. From selenium, (tomatoes, eggplants and peppers), over vegetables, (beans, cabbage and assets) through to chenopodiaceous and umbelliferae.

“For someone who has no idea of agriculture, ecologic farming is the easiest because it’s pure common sense”, he says. If you hire an organic mini orchard — they are available as of 75 euros a month — you will have to be more attentive to its benefits than its disadvantages. The garden workshop will help you to get started and it will be Manino González and Joan Aguiló, who will take care of your little plot. The farm itself will guarantee that all plant complies with the environmental quality label by the CBPA (Balearic Council of Ecological Agricultural Production). 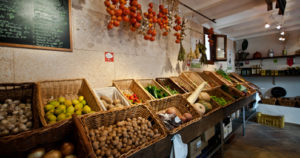 In the Eco Store of the Biogranja la Real you will be able to find an alternative for everything you can imagine. You can find a wide variety of the products that are cultivated on the farm. An idea that coincides with the objective to ensure maximum freshness of the products and at the same time lower the prices by reducing their costs. The ideal customers are called “bourgeois bohemians. People with an average medium-high purchasing power”. But he recognises that eating healthy is not necessarily expensive.

Your oasis of organic farming is the “Lujo Asiatico” (Asian Luxury), only minutes away from downtown Palma. A paradise that has the aim to recover the morality and common sense at the table. At the end of the day Hippocrates already told us: we are what we eat.

THE “SOBRASADA” – MORE THAN A SAUSAGE !

The Sobrasada spread is undoubtedly one of the most popular dishes from Majorca and, with the Majorcan Ensaimada one of the favourite food customs of the islanders.  Sobrasada is one of the treasures of the cultural identity of the island and also an exemplary case of the modern persistence of a product of traditional craftsmanship, which holds one of a few industries related to agriculture, with a strong outreach.

The Majorcan Sobrasada is a cured sausage made of pork and seasoned with paprika, giving it its distinctive red colour and due to the finely chopped meat, making the sausage have a fine and creamy consistency. The Majorcan Sobrasada is not only part of the traditional cuisine of the island, but is also a part of the cuisine of many families in other areas.  Its taste, aroma and texture is highly prized by gourmets, who integrate the Sobrasada in an innovative and creative manner in their recipes.

The incorporation of Sobrasada in the daily diet of many consumers shows that it is alive in our culinary culture. The company Francisco Tejedor García SA “El Zagal” began the production of the typical island sausage Sobrasada in 1905.  Since then, the family Tejedor has continued with the production of their product, most recently under the trademarked name of “Sobrasada de Mallorca”.

During the visit of the company, NEW HOME MALORCA managing director Carsten Scharmann could see the broad product range. Ranging from the traditional sausages, including the Sobrasada of the “black pork”, as well as the product canned or sliced, for easy storage and practical use.

Over 750 million olive trees are cultivated worldwide, 95% of which are in the Mediterranean region. Responsible for more than one-third of the world’s production, Spain is the top producer of olive oil in the world. Olive oil is the main cooking oil in countries surrounding the Mediterranean Sea and is an essential part of the famous Mediterranean cuisine. Extra virgin olive oil is mostly used as a salad dressing and as an ingredient in salad dressings. It is also used with foods to be eaten cold. If uncompromised by heat, the flavor is stronger. It also can be used for sautéing.

The Solivellas family harvests and processes the olives at Es Guinyent farm, which is set in a privileged location to the north of Mallorca, in Alcúdia. The farm is situated very close to the sea and the Serra de Tramuntana  and the olives are cultivated in red, limy soils and enjoy a fresh, sea breeze which contributes greatly to the very special taste of this fine olive oil.

Sebastian Solivellas, second generation of the Solivellas family, explained to New Home Mallorca managing director Carsten Scharmann during his visit  that  50.000 bottles of Solivellas and Oli s’Illa are produced each season. Eighty percent is consumed in Spain, mainly on the Balearic Islands. Twenty percent is exported, primarily to central European countries, though more recently they have also been exported to Scandinavia and Canada. Solivellas is supplying some famous chefs such as March Fosh in Mallorca and Tim Mälzer for his restaurant which he opened in July 2009 “Bullerei” in Germany.

The varieties cultivated at Solivellas are Arbequina, Picual, Hojiblanca and Picuda: the best varieties to obtain oils of maximum quality and whose distinctive characteristics and properties permit complex and balanced blends. Arbequina and Picual, which are cultivated for the elaboration of “Solivellas oli d’oliva extra verge” are collected during the first two weeks of November and offer an immense variety of flavors such as apple, artichoke, green herbs, almond, tomato, mint, ripe fruits, walnuts and banana. The Hojiblanca and Picuda are the ingredients of “Oli s’illa”, their

collection takes places halfway through November and wild fruits, rosemary, fresh herbs, green apple and pear are part of the delightful flavors of this oil.The olive trees are grown on flat land that is easy to work, consisting of red limestone earth at sea level. The system of cultivation is adapted to the regulations of Integral Production, thereby respecting the flora and fauna of the surroundings. Collecting the olives early, when they are at their most healthy, ensures an oil of maximum intensity. The low yields of green olives mean a greater quality, aroma and more fruity taste. The olives are collected by working meticulously through all the branches. This is laborious job, but its compensation lies in causing the least amount  of damage to the fruit and new shoots.

The Denomination of Origin’s criteria guarantee that the oil has been cultivated and processed in Mallorca, an island whose physical and geographical features give rise to a high quality product. It also constitutes a brand which helps spread the word of Mallorca as a tourist destination, something which the Solivellas family considers very important. “It is important to emphasize the relationship between agro-alimentary products and farm maintenance, since the consumption of local goods contributes to the protection and maintenance of Mallorca’s rural landscape, which is of increasing importance to the tourist industry”, explains Sebastian and adds: the process is based on limited production and the early harvest of the olive, which means a more intense oil is obtained.

The Solivellas, registered under the Oil of Mallorca Denomination of Origin, and Oli s’Illa extra virgin olive oil, offer the palate a balanced oil which retains all the intensity and flavor of the olive itself.

Copyright © 2020 · New Home Mallorca
Built on WordPress & WPCasa
In order to provide optimal design and continuous improvement this website uses cookies. If you continue using this website we understand that you accept the use of cookies. Further details can be found in our privacy statement.
Accept Reject More Infos
Datenschutzerklärung & Cookies
Necessary Always Enabled
Non-necessary