Es Baluard Museu d’Art Modern i Contemporani de Palma is located within the perimeter of the Sant Pere bastion, part of the Renaissance wall that surrounded the city of Palma until the beginning of the 20th Century. The defensive bastion was built in the last quarter of the 16th century. The ancient mediaeval walls were strengthened with new structures under the supervision of the Italian engineer Giacomo Palearo Fratí n. His plans were in keeping with the new defensive needs of the period and created an area protected by bastions linked by stretches of wall. The Sant Pere Bastion is particularly interesting for its considerable and strategic position; it was even home to one of the most prestigious artillery schools in Europe.

Various alterations have been made to the Sant Pere Bastion over the centuries. In 1646, under the mandate of Vicenç Mut (appointed engineer and sergeant major of the fortification in 1638), the height of the Santa Catalina Bastion was modified to bring it into line with the Moranta and El Sitjar bastions and link them via the wall. It took on its present-day appearance during the 18th century. In 1952, after more than three hundred years of service, the Sant Pere Bastion finally relinquished it military function. Some years later, it passed into private hands. The new owners had plans to redevelop the whole area and in 1963 they tried to blow up the wall with strategically placed slaked lime bombs, with which they managed to demolish a large part of the western curtain wall of the bastion. The citizens of Palma did not remain impassive in the face of this destruction and their reaction accelerated the declaration of the bastion as an historical-artistic monument, with the state planning its immediate reconstruction in 1965.

After this incident the land was classified for public use and expropriated at the end of 1980s. Without a specific use, the bastion was completely abandoned and fell into a state of disrepair until 1997 when the land was ceded to Palma City Council to build Es Baluard Museum of Modern and Contemporary Art, Palma. The centre was opened on 30 January 2004.

This fresh water reservoir was completed in the 1640s. It has a classical rectangular ground plan of 353 square metres, a lowered barrel-vault roof and openings for ventilation. Following its restoration we can see the different building techniques applied to its walls, one of which is the very ancient fish bone method. 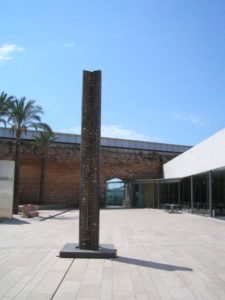 It supplied fresh water to the whole Puig de Sant Pere quarter, as well as to all the ships that docked in the harbour. The water came from the La Vila spring near Esporles, entered the city through the Santa Margalida gate and was channelled to the reservoir through a conduit-aqueduct that passed through the Moranta market gardens and orchards, now the area of Bonaire Street.  After the bastion had fallen into disuse it became a dump for animal manure. When the museum was built, this marvellous area was rediscovered and restored for use as part of the exhibition area.

Since its inauguration, it has been given multiple uses: it is offered to contemporary artists as a setting for their installations, it houses temporary exhibitions and, thanks to its magnificent acoustics, it is an ideal setting for shows and concerts.