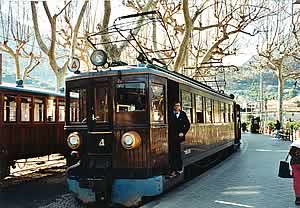 The Soller Train communicates the capital Palma de Mallorca (Majorca) and is used by over a million people every year. The journey takes around an hour and goes across Mallorca plain and the mountains by 13 tunnels to Soller, giving you the chance to fully appreciate the real beauty of Majorca. Basically made of wood, the Soller train dates back to 1912 and since then has been connecting this small village with the main capital of the island. Now, is mostly used by tourist visiting Soller, as many locals prefer to take their own cars and go trough the tunnel to save some time (in fact, it takes about a half of it, so they safe a lot).

The train station at Palma de Mallorca can be found just next to the Plaza de España, right in the centre, in the corner of the Eusebio Estada street with the main Avenidas, at one block from the central bus station. In the early days of the 20th Century Soller become to grow as a commercial village, mainly for its production of oranges and up growing industry. As a consequence, the locals needed a way to go in to the city avoiding the Coll de Soller way, a small, difficult and long way that goes up and down the mountains which was the only connection to the city and where transportation was done with help of animal vehicles such as horses or mules.

This road was plenty of inns where locals can stopped to eat (now reconverted into restaurants serving quality mallorcan food, worth a visit if you drive by your own and these ugly roads doesn’t scary you). The train starts in Palma at the Plaza de España train station and stops for a few minutes in many villages so travellers can hop off or on. Once every day, there is one of the journeys called the Panoramic, being the main and only difference that this one stops around 15 minutes at the Mirador Pujol d’en Banya, so people can take photos from there.

Once in Soller, those willing to go into the Port will find a small Tram which will take them in to the marina.This small tram, also working by electricity, was inaugurated in 1913 and goes from the Soller centre and along the sea until the end of the Port (Puerto) of Soller. The train has different timetables depending on whether is summer on winter, basically because as you can imagine during the hot season there is loads more of people willing to take the train.. But basically, those following are the ones.

To get more information please use the following direct link:    TRAIN SOLLER – HOMEPAGE