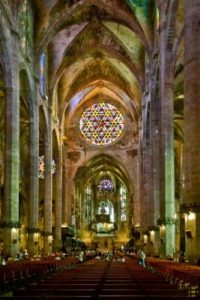 he place where Mallorca cathedral is located – the elevation close to the seaside where the quarter of the Almudaina spreads, in Palma – is full of history. The references available on the place and surrounding territory provide sufficient data to trace a historical sequence that goes from prehistory to the present time. The elevation, within the bay of Palm and limited by a cliff at west, facing the Mediterranean, makes of this place a convenient emplacement to be occupied by man and allowing control of the space that surroundings, both marine and terrestrial.

Before the cathedral, the location hosted other buildings erected by the Romans and the Muslims. Roman pedestals of possible statues possible belonging to a Roman forum have been found in the cloister of the cathedral. The existence of a Mosque before the construction of the Cathedral is very well documented as well, although no attempt has been made, for the moment, to undercover possible archeological remains. The presence of a reused paleo-Christian capital as part of a base of the present altar in the Real Chapel may be demonstrating that, the location constituted a religious place long before the Muslim conquest. The cathedral itself is surrounded today by other important historical buildings such as the Palace of the Bishop or the Palace of the Almudaina, former Royal Palace of the Kings of Mallorca.

It is well known that the location of the Arab Mosque is the same that is now occupied by the cathedral; in principle it seems that the cathedral was constructed around the Islamic building and that the latter was not destroyed until Christian church was finished.The length of the nave of the main body is of 77m and is distributed across seven bays. The width covered by the naves is of 35.3 m, of which 8.75×2 m are spanned by the lateral naves and 19,8 m by the central nave. The lateral naves are covered by pointed vaults of simple square plan; however, in the central nave they are of double square plan. This scheme is repeated both in all the bays of the naves except in the 5th one (from the choir), due to the presence of lateral doors (door of the Mirador and door of the Almoina) which provide it the role of a transept.

In this bay, the longitudinal span of the vaults is slightly longer. The height reached by the vaults in their highest point (the key of the transverse arches) is of 43.95 m, surpassed solely with 44m by the Cathedral of Milan (with tied springings) and by the Cathedral of Beauveais with 46.30m. The Cathedral of Mallorca also is unique in being the Gothic cathedral with the highest lateral naves (29,4m). This means that the height if the octogonal piers, with circunscribed diameter of 1.6 and 1.7m, is of 22.7, showing their extreme slenderness.