Cap de Formentor forms the eastern end of Majorca´s Formentor peninsula. The Majorcans also call the cape the meeting point of the winds. Cap de Formentor is a spectacular bluff, located on the northernmost point of the Balearic Island Majorca. Its highest point, Fumart, is 384m above sea level. It has many associated bays, including Cala Figuera, Cala Murta and Cala Pi de la Posada. 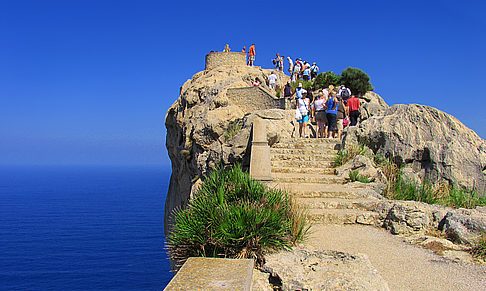 The 13.5 km street which runs from Port de Pollença to Cap de Formentor was built by the Italian engineer Antonio Paretti. His masterpiece on Majorca, however, was the snake to Sa Calobra. Instead of being overwhelmed by what stood in his way on the cliffs, Parretti observed the Tramuntana winds and understood: where the slope was too steep, he made a curve. When he had to remove part of the cliffs, he placed the waste in other places where it was needed. The result was the two streets, which are nestled together in the mountains like abandoned silk ribbons.

The northernmost end of the Majorcan world was formed quite bizarrely by the wind and water. The steps, walls, paths and the lighthouse on Cap de Formentor were built from the cliffs in 1892. When the poet Miquel i Llobera, who owned the Cap de Formentor peninsula, died, it was divided into lots and sold. In 1928 Adan Diehl, a native Argentinian and art lover, decided to build the Hotel Formentor and to endow the purchase of art. Since then this hotel on the Platja de Formentor has been the meeting place for personalities from all over the world. It is located somewhat apart from the main street; by following the street further, one can reach the lighthouse, which is surrounded by protected rare plants.

The headland has quite a few lookout points with spectacular views. The most well-known is Mirador del Mal Pas, also named Mirador d’es Colomer after the small island Colomer, the view from which can be seen in the picture above. The panorama from Majorca’s Finisterre illuminates Menorca in the east, Cala Fiquera in the west, and Alcudia with its sandy beach in the south. But the view of the cliffs below causes even the most fearless to feel weak in the knees. The sea roars 300m below and if that isn’t enough, the winds found at the headland are vicious.

In this place a German radio operator and pilot built a private weather station in 1996, which transmitted encoded radio transmissions to the base station 56 km away (a beam radio). This and other data was then sent all over the world wirelessly. The analyses were used by hotels, organizers, sailing clubs, flying clubs, and others. They are freely available to anyone who has the necessary receiving equipment. The official weather department is located in Porto Pi, on the Palma de Mallorca harbor. It is responsible for international ships, air travel and other sites.

In the southeastern part by Racó de Xot there is a cave with an opening into the sea. It has two entrances located about 8m over the surface of the water. The cave has a length of 90m and a height of 8m and is a part of the most important sources of information from the prehistoric period of talaiot culture.