Roman general Quintus Caecilius Metellus. The San Roque street and the street of the General Survey were the old shafts and decumanus thistle city and its intersection were the forum, the nerve center of the Roman city.

Therefore, this area corresponds to the current first city Almudaina neighborhood, which was fortified. It retains a door of this wall: the Almudaina street.

The period between the V and IX is known by historians as the dark ages. However, from this period have documented the arrival of a Jewish community in Mallorca, Palma remained so over successive periods in the history of the city.

In 902 the Balearic Islands were incorporated into the Umayyad Emirate of Córdoba. At first Andalusian society occupied the Roman city, which now took the name of Madina Mayurqa.

In the tenth century the city was equipped with a hydraulic network from the channeling of water from a source (the source of the Villa), six kilometers from the city walls. Also built a palace inside the Almudaina.

A significant population increase, prompting the growth of the city beyond the Roman walls. For this reason, in the early eleventh century ran an ambitious project that widened considerably around the city and a new wall. This new city corresponds to what is now called Old Town. In 1114 came the Pisan raid that destroyed much of the city. However, Medina Mayurqa rebuilt until in 1229 the troops of King James I conquered Mallorca.

The conquest of the island by the king of Aragon means a before and after in the history of Mallorca and, by extension, of the Balearic Islands. It is from 1229, with the creation of the Kingdom of Majorca, when the foundations of the current Mallorcan society: religion, culture, institutions, customs, language … Medina Mayurqa renamed the city of Mallorca.

In 1249 the island was organized from a large town called college. The executive authorities of the new government were called jurors. Already in the fourteenth century, the jurors enjoyed an advisory council that eventually became the Great and General Council. 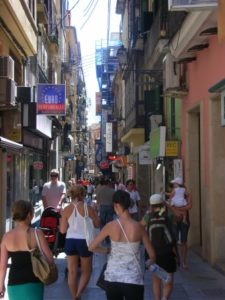 During the Middle Ages and the modern age Mallorca city grew slowly within their own walls. The assault on the Jewish quarter of 1391, the harassment of farmers during the Revolt of 1450 foreign and 1521 Germania, in which farmers and artisans were made with the power of the Kingdom, are the most notable warlike events, which can be add specific episodes of clashes between different factions-what we now call clan struggles.

In 1715 the troops of Philip V Bourbon entered the city, the jurors who had declared in favor of the Archduke Charles. This caused the adoption of Decree of Nueva Planta, under which civil institutions disappeared since 1229 had created the Kingdom of Mallorca. It will recover the ancient name of Palma, which replaced the city of Mallorca. Administratively the city was organized from Castilian model. It created the city of Palma, which inherited the house of the Jury and the Great and General Council, with its furniture, of which especially the picture gallery of the illustrious sons of Mallorca.

During the French War (1804-1814) scenario Mallorca was not any battlefield, however this does not mean that live outside. Palma became a refuge for many Spaniards. The city was filled with people from all walks

Despite this sudden increase in population, continued to grow intramural Palma. Just as Santa Catalina suburbs or extended Molinar sheepishly. Not until 1900 that approved the Plan Calvet Palma urbanism, from which the city widened far beyond its defensive walls.

In 1902 he began the demolition of the walls, which began to widen the city, a process that dramatically interrupted only during the unhappy years of the Civil War. By the early fifties of last century developed the tourism industry hard and became the first engine of the island’s economy.

When the late seventies recovers the democratic system in Spain, Palma and tourist capital is undergoing a process of modernization and re-produce significant urban growth that has stretched to almost the first decade of the century.